9. How It All Starts: Find Out How We Use Karpman’s Drama Triangle: The Rescuer, The Punisher, the Victim, In Our Relationships.

Blog 9. How It All Starts: Find Out How We Use Karpman’s Drama Triangle: The Rescuer, The Punisher, the Victim, In Our Relationships.

(If you find this informative helpful, then please find the donate options at the end of this blog in order to ensure this website’s future. Thank you.)

As we grow up we often learn to play emotional games without thinking what the result or consequences might be. Later, when we’re adults, these games seem normal to us, they’ve become learnt habits, and we never question why we’re acting this way.

Because they’ve become learnt habits, we behave in ways that seem okay to us without wondering what we’re actually doing.

The most popular emotional game I am referring to is one that, if not fully grasped, can get in the way of your understanding of how relationships work and the roles you may either choose or be forced to play: how people behave or act in relationships, business or any given circumstances: what roles you take on as a result: how people may expect you to behave and how you react to those expectations. Remembering of course that emotional games can be either conscious or unconscious.

The game I am specifically referring to is Stephen Karpman’s Drama Triangle that describes a model of human interaction. I saw this model acted out many times while seeing my clients. The model described is what for explanation purposes I refer to as the Triangular System – The Rescuer, Victim and Punisher/Persecutor/Bully:

It’s a type of emotional game or dance that is played out by at least 2 people, moving around the triangle, switching roles, either becoming the rescuer or the victim. Eventually this leads to either of the parties, usually the rescuer, taking on the role of the punisher/persecutor. This can happen within seconds, minutes days or over long periods of time.

Here is a diagram to illustrate this idea: 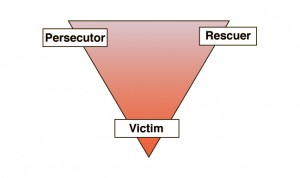 The rescuer is not a person helping someone in an emergency. It is someone who enjoys the feeling of being a kind of saviour. A rescuer is someone who will always be there to help out. They are the advisors and they are the capable managers. They get up and go. They rescue. They save the day. They often offer help and assistance sometimes to their own detriment. Although rescuing someone might make them feel good at a deeper level, they can also play upon the victim in order to continue getting their payoff. And the most important payoff is the feeling of being needed and wanted. Except that the reality of this payoff is often a way of distracting themselves from what they should or could be doing. Each role played in this triangular system is played out because it’s a way of avoiding looking at anxiety and underlying feelings. It’s a way of focusing not on the self but on others.

However, to be a rescuer a victim is required. And depending on the situation these two roles can be interchanged. And so the triangular system gets set up:

A victim is someone who has learnt to become ‘incapable and unable’. They are the ones who can’t manage, don’t do and won’t do. They find excuses  – they never seem to have enough money, enough time and so on. Often they are ill and vulnerable. They complain that things are always too hard. They love drama and the attention that creates. This too is a way of avoiding looking at anxiety and underlying feelings and taking responsibility for themselves or situations.

So they require someone who does ‘do’ – a rescuer. Someone to take the supposed burden away from them. Or they look for situations so as to ignore what needs dealing with. It’s easier this way, so why not.

However as I wrote in my previous Blog, if either party is forced to continually play the rescuer or victim roles eventually this can cause resentment. At some point, either parties will at some stage get annoyed. And normally it’s the rescuer that gets annoyed first. Although the rescuer might feel wonderful at being a saviour, at some point they’ll feel they’ve been taken for granted.

And feeling unappreciated, the rescuer switches roles and becomes the victim. The original victim then has the choice of either rescuing the situation or becoming the persecutor of what was the original rescuer.

This is when either the situation is somehow resolved. However usually the outcome is one of suddenly anger and accusations of resentment ensue – and a fall out.

If the triangle system is not understood, this situation can be consistently re-created in different situations until once again there is a fall out.

Why this triangular system?

Often we are not aware of the subtle reasons for choosing the triangular system of behaviour:

By taking on the role of the victim, by being passive and expecting others to take responsibility, means that the rescuer will eventually get frustrated and irritated. If this is not addressed the rescuer could get angry thereby becoming the punisher.

Consequently, an eruption occurs and the relationship usually dissolves. So the end result of utilizing this system is negative. It results in both the rescuer and the victim falling out. On an unconscious level at least, the usage of this triangular system can be seen as a way of keeping intimacy at bay. As the collusion of the rescuer and victim deepens, and as they get closer, so too does the frustration leading to the eventual splitting of the relationship.

There is another payoff not spoken about in Stephen Karpman’s model but one I observed through seeing my clients.

I have and will blog about this many times to come: Due to the fact that we learn very early on that our mothers or indeed nobody for that matter cannot be there for us 24/7. Depending on the relationship we have with our parents and what happens as we grow up, intimacy can be difficult for some to achieve. If for whatever reason intimacy is feared and difficult for a person to achieve, we may tend to set up situations like the triangular system. This means that somewhere deep we know that the intimacy will end in tears and so we never really get too close or if we get to the point of being very close to someone  – guess what? The persecutor/punisher (in other words either the victim or the rescuer) will end the relationship. Consequently, a ‘long term for-life’ intimacy bond is unlikely to occur leaving both parties feeling bad even guilty about themselves or their behaviour.

The triangular system is therefore destructive – it does not lead to a long-term intimacy or a happy ending.

This system does not help to develop self-worth either. Rather it punishes. It ends in tears leaving a wake of abandonment, guilt, and anger and a victim asking, ‘What have I done to deserve this?’ Unfortunately, most victims don’t learn that their passivity and pushing responsibility onto others is one of the reasons they lose relationships.

On the other hand, the rescuer has no idea that playing mummy, taking on responsibility is also a way of controlling a situation which eventually will annoy the victim leading to a fall out. So this is why I mentioned the collusive aspect – the victim needing the rescuer and visa versa.

In my previous blog I wrote about putting people on pedestals. The concept also relates to the triangular system:

When the victim declares, ‘I’m just not like you, I can never be as good as you”. This puts one person down while elevating another, the rescuer.  This is what also leads to irritation and resentment. It’s annoying to constantly hear someone putting themselves down because it means you have to constantly elevate them. It forces the rescuer to take responsibility for both parties.

On another level, the victims often say things about themselves without realising that they are so obviously looking for praise. This can become hard work for the rescuer and again – irritating and it can result in the end of a relationship when friends become tired of doing the propping up.

However, understanding how we develop, what our patterns of behaviour are, how we land up creating situations that become destructive, leaving us feelings abandoned and unhappy.

I always say you cannot just be happy, move on and forget your past without fully understanding yourself and your patterns of behaviour. It’s only once you have a fuller understanding, that you can begin to make different behavioural choices that suit your life’s goals.

Note: Please do subscribe to my blog website. I will not bombard you with e-mails. You will get a monthly reminder of my website for your perusal. However, if there is a new offer, separate to the blog site I will e-mail you.  Thank you.

Your contribution helps funds and support my blog. If everyone who likes this blog and finds it useful, then also helps to fund it, its future will be more secure.

Donations are taken via PayPal. You can donate with your PayPal account or with a card.

Your details will stay with us (and PayPal) and we won’t spam you..

#advice#advisors#anxiety#couples#emotional games#feelings#game#managers#model#parties#partners#payoff#persecutor#punishment#rescue#responsibility#roles#Stephen Karpman’s Drama Triangle#taken for granted#victimadulthoodexpectationsloverelaterelationshipsself-worth
« Previous PostHave You Got Enough Courage To Break The Shell Of Fear? Next Post »Transformation Happens When You Let Go.